The property is named after the original resort (Pine Grove Park Resort) that was built and developed back in 1912 by Robert Taylor, chief animal curator for The Circus World Museum and his wife.  After he passed, she had one of the state’s first manmade lakes built and added changing rooms, a dance pavilion, cabins and concession stands.  The lake was first called Lake Chicago and then later Taylor Lake.  Remnants of the old retaining wall can still be seen on the property. 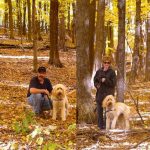